On a fine spring morning like this I often feel compelled to go out and have a jog around the local park and then return for a refreshing morning shower. This morning I did so, with a spring in my step and a discrete bulge in my yoga pants.

After working up a little bit of a sweat running and watching a few of the dog walkers out in the park playing with their balls, (calm yourself Amber in Colorado), I got home, turned on the shower and stepped under the warm stream of rejuvenating water.

I think I smelled as lemon fresh as a grove of lemon trees beside a soap factory when I stepped out of the shower. By the time I sat down at the computer in the kitchen I was ready for anything. 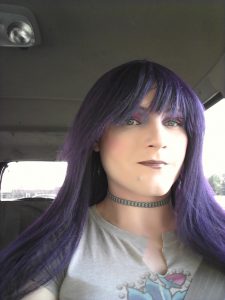 After I opened up my computer two things immediately caught my attention. The first was a delightful email from Kay Lee, who sent this lovely picture. I’m sure you’ll agree she looks delightful.

The second was a drop of water beside my ‘Return’ key on the computer. A moment later there was another. Looking up, I could see a slightly indiscreet stain on the ceiling where some water was seeping through. I moved my computer away from the drip, and then called Sylvester, who is so handy at these things.

Sylvester is such a darling. He hurried round, parking in my wife’s slot, and used my rear entrance. She’s away travelling – I believe she’s in Patagonia this week (wherever that is).

After a lot of huffing and puffing and bending over in the shower he declared very excitedly that he thought he’d have to squirt some mastic in my crack. I felt quite nervous at the suggestion. I’m really not sure what mastic is, but if it helps I guess I will just have to succumb.

Anyway, he’s up there now getting ready. I may have to go and change in a moment. I do hope he takes the proper precautions!

Have a great day.