‘I learned by paying attention long before I started dressing.’ – Charlize 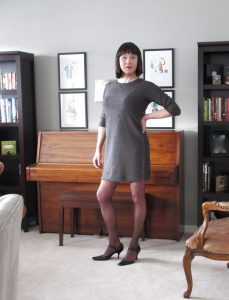 Charlize bought clothes for his wife long before starting to dress. He points out that the attention to detail and understanding and appreciation of female form is at the heart of his desire to crossdress.

‘I learned by paying attention long before I started dressing.’

I recently chatted with Charlize about her crossdressing. Her honest and open responses are testiment to how secure Charlize feels with the process.

‘I first dressed about 3 years ago. I did it for about 7 months (those are the pictures of me with shoulder-length hair). Then I stopped for a few months. Then I did it again for another 7 months (the pics of me with shorter hair). Then I stopped again. I purged my clothing on one occassion because my wife felt threatened. She thought I was more at ease in her clothes – and my own – than she was.’ 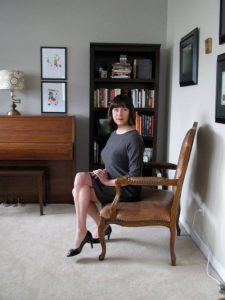 Charlize is in a loving relationship with his wife and she is accepting of his desire to dress. The issue is not a problem to their teenage daughter, and they are comfortable together having their toes done, and enjoying the feminine side of life.

I asked Charlize what appealled about dressing.

‘Initially it was the experience of immediate power that came with being pretty. I’m not attracted to men and have no interest in being with them. But seeing how they would fawn and fumble over me was entertaining.’

Charlize has a very specific style. She projects a confident female form, strong and capable. 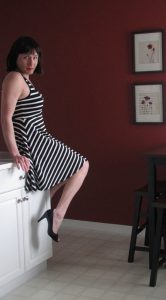 As for advice for new dressers Charlize suggests:

‘I guess I suggest that they ask themselves why they want to, and if you want an example of how to dress, don’t look at Vogue. Look at J Crew or Ann Taylor. Oh.. and for the love of God, don’t wear hose with open toe shoes!’