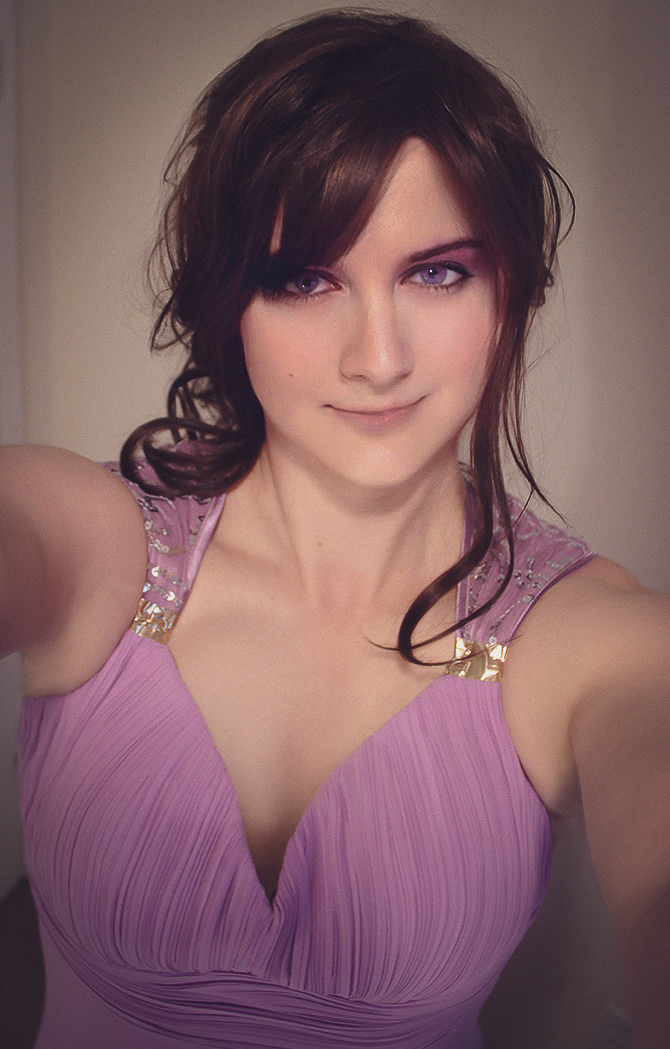 I do so love swimsuits that have that lovely high waistband. As I looked at mine hanging from the back of a chair in my garden, snow drifting down I slipped into the hot tub.  A light steam seemed to rise into he chill night air, as I sat in the warm water watching the snowflakes and sipping a negroni.

I was fortunate this week to enjoying interviewing Ashley Baron, a familiar face on Tumblr and more recently Twitter. As we sat in the freezing night air, surrounded by hot water and the beautifully manicured bushes Ali, my gardener, has been so busy with, we chatted about her journey and what crossdressing has meant to her.

Ashley started dressing following a breakup with a girlfriend. She’d left some of her things, and one night curiosity overcame Ashley, and suddenly there ‘she’ was. Whilst always a little curious about reaching for a pair of panties, and exploring the idea of gender fluidity, this was her first real foray into crossdressing. At the age of 23 she discovered a world which would be a natural fit.

“I was surprised how natural it was for me,” she tells me. “I think the most unusual thing for me when I started crossdressing was realizing just how feminine I actually looked in those clothes. It really kinda shocked me, and just made me want to see how far I could push it.”

Ashley has always admired strong female characters. For her these were the role model that would steer her values and her life. A principled and genuinely authentic person, Ashley found great joy in cosplay – and emulating the characters that inspired her. Unafraid to take on a challenge she dresses provocatively and challenges herself. The character of Babydoll in Sucker Punch is one of her favorite costumes and one she pulls off with consummate skill.

When there’s a light breeze in the Quebec night, the clouds skid across the sky, and the stars break through from time to time. It’s quite lovely.

Ashley carried on, “At this point I crossdress about 90% of the time in my life, and thankfully, I’ve always had a family who supports me. It’s the same with my job. I bartend at the same place I was bartending as when I didn’t wear a bra to work!”

Ashley laughs as she adds, “My bosses are awesome. I suppose the only thing that has changed is that I make better tips in a push up bra than I ever did as a ‘normal’ bartender.”

I asked her about the way she’s become quite an online personality. She’s so cute when she blushes. Perhaps one of the most endearing aspects of Ashley is her genuine modesty.

“I have never really considered myself an online personality,” she confessed. “But i’m slowly starting to realize I might be and I seem to actually have a fan base and people who love me, and that is the most amazing feeling ever. I love that people are inspired by me! That’s such a cool aspect of what I do, that I can bring joy to other people’s lives. And as far as Tumblr goes I’m sad to see it change. Tumblr was a platform that let me express myself, and now that is being taken from me and others, and that’s disappointing to say the least.”

Now, I have to say that I was a little surprised when I noticed my neighbor Marjory and her girlfriend Amanda (my wife’s appalling friend) next door peering over the fence. Amanda, as you know, is one of the only women I know who wears tweed underwear. I believe it’s specially designed by Carhartt for her. Marjory has recently returned from a competition on the busy competitive eating circuit. Ironically she appears to be leading in the sausage division, which is beyond ironic considering she is a committed lesbian. I hurried the interview along as I knew Marjory and Amanda would be invading the hot tub shortly.

I had thought Ali had discouraged Amanda from infiltrating the garden, but he felt it was unfair to shoot her with the paintball gun so often, so I have tried to adopt a more humanitarian approach, at least over the Christmas period. It’s a little like the Christmas Truce of 1914.

I asked Ashley if she had any suggestions or advice for other crossdressers. Her reply illustrates Ashley’s very generous nature and I am quoting her verbatim.

She said, “I never want to influence too heavily people who have to make their own decisions on these things, however, I will say this: Never feel embarrassed or nervous or ashamed about who you are. We are finally (almost nearly finally) pulling away from a society that has been telling people forever that even considering crossdressing, or transitioning, or even questioning your own sexuality is a “bad/wrong/evil” thing… it’s not. It’s not a bad thing to discover who you are and ask yourself who you want to be. Never be ashamed of trying to find out who you are.”

If you would like tosupport Ashley’s journey she has a Patreon account which you can use to send a little appreciation here: https://www.patreon.com/AlsoAshley

This is a season to be generous, and I’d strongly suggest reaching out to her showing your support.

Finally, as Marjory and Amanda squeezed through the fence defences and came into the garden with their towels, Ashley added “There is nothing sexier than someone who is confident in themselves.”

I glanced at Amanda, wondering if there is such a thing as too much confidence. As editor of Pig and Pig Farmer I suppose it is important to have an opinion about everything, and she certain has that.

Ashley has a healthy diet avoiding fast foods, and focusing on vegetable and chicken. It’s a far cry from Marjory’s red meat based diet. As we relaxed the night become still more beautiful, and I was left thinking how Ashley really is the perfect guest. Be sure to show your appreciation HERE.