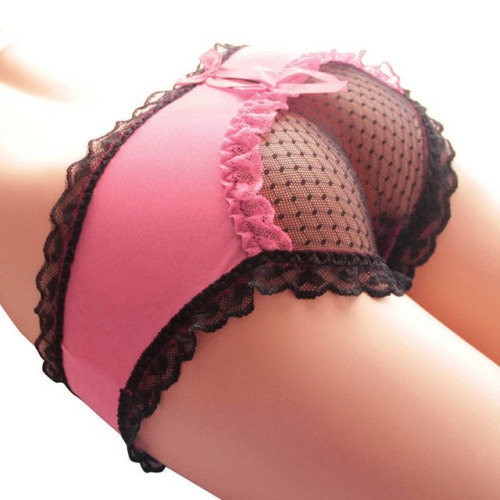 I admit it. I started crossdressing before I was a teenager. I found myself sliding down a slippery slope that led first to shame and guilt and later to an acceptance of the unique individual — and unique pleasures I could enjoy!

The first time I pulled on a pair of panties I can’t have been more than 5 years old. They belonged to my cousin and she’d left them at my house after a sleepover. My mother mixed them up with my things in the wash, and they found their way into my drawers.

It’s remarkable, but even then I could tell those little black panties were different. I felt guilt and knew what I was doing was wrong, and yet still derived a guilty pleasure from putting them on for a few moments.

Right from that moment I knew it felt great. The fact that it was a guilty secret made it all the more interesting. So, there was strike one.

I probably didn’t wear anything feminine until I was sixteen, and already had left home. I found myself with a girlfriend who loved the dress up style of the new romantics. That was a movement that’s largely been forgotten today, but stepped into the realms of gender fluid style in the early 1980s. It was almost pushing back against the punk world, and my little girlfriend loved to go out with me after having applied makeup to my face and painting my nails.

All that was innocent enough, except that when we’d get home after a night out, my girlfriend would undress me, revealing the panties and bra she’d secretly asked me to wear, tapping in on the thrill I’d learned so early in my life. Gradually, over the years she would dress me more and more elaborately until now and then I’d be going out completely dressed as a woman, and getting away with it. When we’d make out at a club or a concert onlookers would be convinced she was a lesbian, adding to the already heightened thrill of being a highly sexualised teen. Keep in mind that two lesbians making out together at that time was not something you saw in public very often. Strike two.

My dressing went into abeyance after that relationship ended. I found myself following a life of conformity and conservatism. I felt something was missing, but was trying so hard to conform I don’t really think I had any idea what was lacking. By my early thirties I was on the treadmill of mediocre marriage and depression. Only when that structure disintegrated in divorce did the world begin to reform itself.

And then came Monica. In the post marriage landscape I looked for new connections and experiences, and with new found sexual confidence found myself asking for the things I actually wanted instead of attempting to follow a norm made concrete by society. As lovers came and went life drifted toward a better resolution. Then, one day, I found a lover who shared my appreciation of lingerie. Only she asked me to put it on, and then make love to her. The passion was heightened for us both, in a breathtaking flurry of nylon, and and silk.

Immediately the thrill returned. Then came the makeup, the heels and new delights in the bedroom. Having shed the shame and feelings of hesitation, it was like diving into a pool of stardust, and coming out sparkling with excitement. And there it remains.

The breathtaking intensity of dressing is something that never ceases to amaze me to this day.

Three strikes, and I am out! Completely out!

Be sure to follow me and enjoy the world of Fiona Dobson!

34 Replies to “The three reasons I couldn’t stop myself from crossdressing.”