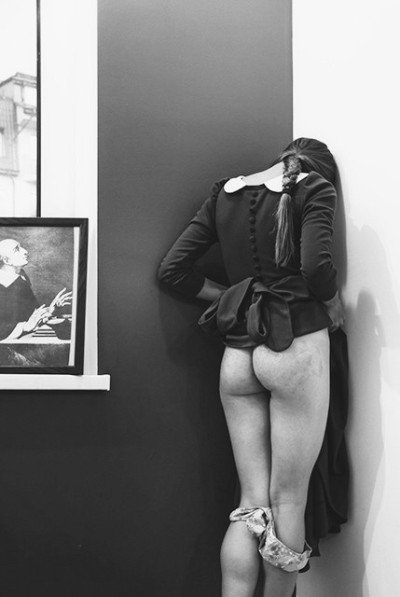 I tried to look round in the direction of the footsteps, and as I did so I heard a gasp go up from the audience. What was that? Something surprising… something revealed? I struggled to throw off the hood but it was no good, and I head laughter coming from the audience.

What was about to happen, and why did it illicit such a surprise from these voyeurs watching? Then quite suddenly I felt the pouring of oil, warm and slippery over me, dribbling between my exposed buttocks then down my legs and my back toward my head.

There was a murmur of interest from the crowd as whoever was doing this must have played to the crowd a little. Laughter, and then I felt something moving against me.  At first I thought it an object of some sort, perhaps latex or a soft rubber, against the cheeks of my up turned buttocks, but then something else happened.

Inside the hood my screams of surprise filled my head, but made little other impact as I began to feel myself being held apart. Then hands pressing, laughter and cheers, and I struggled and twisted and turned within the bonds that firmly held me. I was shouting behind the gag.

I was panting and gasping in fear, my heart hammering and still I could feel something moving, writhing against my flesh. I tensed my muscles, and held myself frozen, but in doing so just felt the irresistible pressure of slippery oil and something beginning to worm its way first over my buttocks and then into the crease between, and then the unmistakeable and horrible sensation of that lethargic but persistent movement against my now taut flesh as something began to sink deeper into the crease of my body and slowly but surely began a descent into penetration.

The crowd was going wild.  It seemed each twist and turn of my body, as I tried in vain to prevent this thing entering me, was a elicited hysterical laughter from those who watched.  They were chanting something and all my writhing achieved was to stoke those jeers and taunts into greater volume. Frozen in that feeling I clenched myself but could now feel the penetration moving deeper, slippery and insistent. My cries were merely the seasoning on the meal for those feasting on my horror.

I don’t know how long it lasted. It could have been a few minutes or half an hour. I was soon hoarse from my cries. I could feel the bruises on my arms from my own struggles against the bonds, but that was nothing compared to the images of this thing, this creature that filled my imagination. I felt sure the horror would drive what little sanity remained in my mind out forever.

And then it was over. I was spun upright. There were cheers, and I felt the chair maneuvered off the staging or whatever this had been. I felt a sharp prick in my arm, and then a slow soft sliding down into a spiral of somnambulance. I was no longer in the hall, or where ever these privations had been performed. I had a sense that I was being released from the chair, but behind the hood could see nothing. I tried to stand but my legs simply didn’t work. The hood was removed and I could see I was in the van, and the gag was removed. I didn’t really have a sense of who was doing this, it was all just happening to me.

The hood was replaced, and I couldn’t lift my arms to remove it.

The next thing I was aware of was the warm softness of my bed. I knew time had past because I was vaguely aware of being in a burgundy negligee. I felt clean. I think I’d been showered or at the very least washed. I felt soft and comfortable. And then I slid into a deep and untroubled sleep.

My eyes opened to see sunshine streaming into my bedroom. I lay still, and slowly let my thoughts form.  I would normally say I waited for my thoughts to gain coherence as I woke up, but as my memory of the previous night slowly began to form, and I became acutely aware of the negligee. Coherent would not be the first word I would choose to describe the tumultuous cascade of memories that solidified.

I looked down at the lacy negligee. Someone had put me in that.  My wrists, and my ankles were bruised. Slowly I began to remember the previous night. I gasped in surprise, and also wonder.

“What the hell had that been about!” I said out loud, as I began to realise the thoughts of last night were not mere wild imaginings, but memories of real events.

I sat bolt upright, my muscles hurting me. Still the chastity device nestled between my legs.

On the night table next to my bed was an envelope with the name ‘Andrea’ on it. That would be Devina’s doing. I reached for the envelope and opened it.

Cash. Hundreds of dollars in fifties. I counted it out. Seven hundred and fifty dollars.

I staggered from the bed and moved unsteadily to the bathroom. I stood in the shower, noticing that the bath was a little slippery. The memories were flooding back now. This must have been where I was cleaned  up.

A warm stream of water tumbled over me and I began to wake properly. I scrubbed myself with soap, then shampoo, and then a body wash. It seemed my whole body was soiled and unclean, and the more I washed the less clean I felt. I don’t really know how long I was in there but gradually I found myself regaining composure.

I looked at myself in the mirror, the negligée on the bathroom floor. I was bruised, but physically more or less unharmed. Psychologically I think the trauma had yet to set in. I was more puzzled than anything else. What the hell had happened last night? And why?

I brewed some coffee and contemplated calling Devina. Did I really want to do that? As the coffee sparked my brain into life I began to regain composure.

The sunshine outside was reminding me that there was a world out there waiting for me to do something. I contemplated my next move, and then very slowly sat down and dialed Devina’s number.