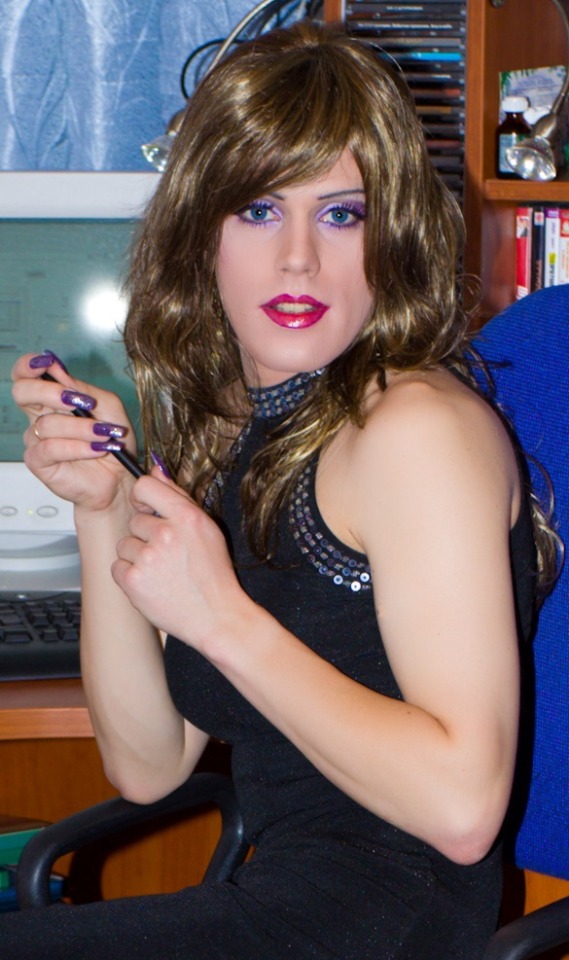 Over the next few days I waited in anticipation of a call from Devina. It seemed as though she had forgotten me and while I went through the motions of work my every spare moment was consumed with thoughts of her and how I might turn this relationship from its current course.

Perhaps she’d respond if I asked her to join me for a romantic evening and dinner. Most people enjoy that, however depraved their version of their sex life might be. And after all, Devina couldn’t be all bad. Maybe it wasn’t her fault she had taken this dark path and drawn me so helplessly down it. Perhaps deep inside her there was some good, a warm and loving person hidden away just waiting to be drawn out.

I can remember sitting one evening staring out across the lights of the city, my phone nearby as I hoped she’d call, while I wore a fluffy pink teddy and some slippers. I sipped the mint tea and clutched my arms about myself thinking of her strong arms around me. Yes, that was the real Devina. Of course, there was that other form of herself which she probably just put on for show, and I supposed if I had to indulge that then I could forgive her that. After all, as surprising as it so often was, I at some level had enjoyed some of those depraved activities she’d put me through. Maybe that was, after all, just a small part of her. Perhaps if I could accept that I could teach her to move our relationship to another level.

I imagined her holding me, and wanting me. It was a delightful thought. The more I gave myself over to the idea the more it appealed. When the phone did eventually ring I leapt to my feet and answered.

“Put on some jeans,” she commanded.

“How are you,” I asked, trying to soften her.

“Shut up. Put on some jeans, some make up and some heels. I’ll be outside your apartment building in five minutes.” She hung up and the phone went dead.

I hurriedly applied some make up, brushed my now longer hair, and applied a bright red lipstick. No one saw me as I descended in the elevator, and to be honest I didn’t care if they had, my heart pounding with excitement. As I stepped out onto the sidewalk Devina’s black Lexus swept up and drew to a halt. The door swung open and I said, “Hello.”

“Shut up and get in,” came the reply.

I watched open mouthed. What was taking place on the other side of the mirrored glass was shocking. I had no idea why Devina had summoned me here, and as I watched I felt increasingly uneasy.

I would guess that this office had once been some sort of police interview room. The room I sat in was small, dark and as much as I always imagined Devina in only the most sophisticated of offices, I was struggling to see what she was doing here. The place was quite dilapidated, looking as though it had been more or less abandoned for the last twenty years. The offices building was empty but for us, as far as I could make out.

“Be quiet and watch,” said Devina. She was being nice to me, though you’d not think it.

“What is this place?” I asked.

“Just a little facility we sometimes use,” came her reply.

I wondered about that ‘we’. Before I had much time to consider the plural pronoun there came a sound from outside the door, and I could hear someone moving down the corridor. A moment later the door in the room I was looking at opened, and Dwayne entered, almost filling the doorway, along with a small figure.

It was evident from the start that although the slight figure was bound at the wrists, they were not struggling. They were also dressed in a short summer dress, which was incongruous in the cool of December in Chicago. The room was warm, but all the same, it seemed out of place.

I watched as Dwayne pushed the young woman over the table, then told her to hold the edge with he fingers as he secured her ankles. She did so unresistingly, and once their ankles were secure he stepped around the table to where he could untie the girls wrists and then secure them to the legs of the table resulting in the girl being secured and stretched over the surface of the furniture.

The demeaner of this young woman unresisting, though clearly subservient in every way to Dwayne. They did as they were told and as a few words were exchanged they generally looked at the floor, not meeting Dwayne’s gaze.

“What on earth is going to happen,” I asked Devina.

“Please, don’t talk.  Just watch,” came her reply. “After all, I want you to think of this as the next step in your training.”

She smiled softly, and inside I felt a small flutter of excitement replace the fear.  I do think she was becoming fond of me. Her smile was really quite gentle in the dim light of that small room. Then I became aware of the activity in the room next door and found myself watching with a sort of morbid curiosity.

What followed was quite intense. However, it was only a moment before I realised my initial impressions had been mistaken. As Dwayne lifted the hem of the brightly colored skirt revealing the naked form beneath I noticed that this ‘girl’ was, like me, equipped with a chastity device and was in fact a young man, not that it appeared to make any difference to Dwayne.

As the process went on the boy would look toward the mirror at times. I think he knew there was someone watching, but he did not cry out. What would be the point? He knew no help would come from that quarter.

Before completion Dwayne withdrew himself and unfastened the cuffs around wrist and ankles. The boy, who I had expected to run for the door did nothing of the kind. Instead he dropped to his knees, where Dwayne had now taken a seat, and immediately started to bob his head vigorously over Dwayne’s ample dick and bring him to his climax.

I suppose it went on for ten minutes. And then Dwayne simply pulled up his jeans, did up his belt and left.

The boy slumped over the chair and remained there.

I turned to Devina and asked, “What was that? What did I just see?”

“Oh, Andrea,” she said. “I just wanted you to meet Veronica.  She’s going to be your new trainer.”