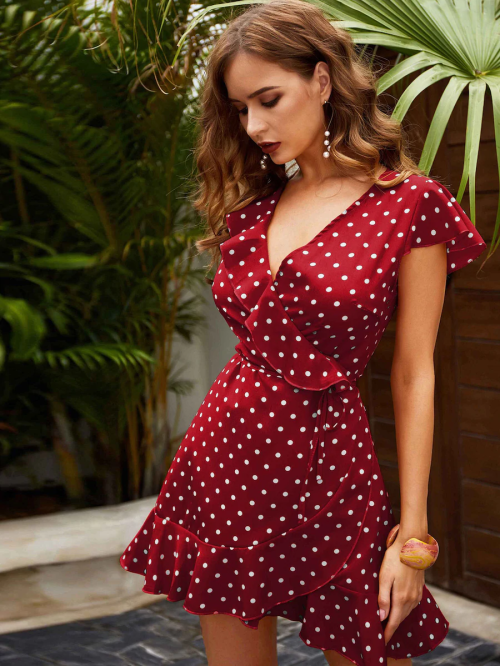 Did you know you can find all episodes of Clothes Maketh The Man here. FD.

To say I was disappointed with how the golf turned out was an understatement. Here I was trying to shift Devina’s view of me, and all the while I was sinking deeper into a quagmire of humiliation. How could Devina possibly come to admire me if all she saw was a little sissy who craved nothing but the abuse that she and her clients meted out on me?

As I followed Tanya Toogood and Dwayne driving back into the city it occurred to me that at least when one attended some sort of fetish event, I supposed, one walked away afterwards and resumed life in a somewhat normal fashion. And yet here I was, dressed in a summer dress, in chastity and following two people who had no use for me but for humiliation and likely degradation.  How could Devina respect a person like me? My life had become consumed by my own destruction.

As we snaked through the late afternoon traffic I took a call from Steve, my business partner.

“Where have you been, Andy?”

It felt strange hearing my name like that.  I was getting very comfortable with the name Andrea.  I smiled to myself thinking that I guess Steve would never know me as Andrea. Then the smile faded as I began to realise I quite liked myself as Andrea. She felt so much more the person I am.

“Oh, I wasn’t feeling very well. It’s just some bug. Somethings going round,” I replied. Those were to be words that would return to haunt me a few weeks later.

“I’ve sent you a file. The creative team’s come up with something for San Francisco. They’ve been asking us to work on a few more projects recently. You’re going to have to get back out to San Francisco soon. It’s all profitable work though.”

“That’s great,” I said feeling uneasy. “I hope they’re not overloading us.”

“We could use all the work we can get right now,” he replied. “Besides, they pay well and they pay promptly.  We can’t turn that sort of thing away. Just check out the creative drafts in the file and let me know your thoughts.”
I watched Dwayne lurch between traffic lanes ahead, and tried to stay close. I didn’t want to think what the punishment might be if I fumbled the ball on this one.

“I’ll get it back to you in the morning,” I replied.

“Are you anywhere near the office,” said Steve. “You should show your face in here now and then. Half the staff have never met you and I don’t think it would do you any harm to connect with he new creative team.”

“Sure, that sounds like a great plan. Not today though, I’m on my way back from the golf course.”

“Golf course? Well, that’s probably a good thing.  You sound tired.  You should make sure you pace yourself. It’s good that you’re taking care of yourself.”

I kicked the car down a gear and hurried forward to catch up with Dwayne before the lights he was crossing changed. A car blasted me as I slipped through on amber.

“Everything alright there?” said Steve.

“Oh, yeah. Just some nut in the traffic,” I said as calmly as I could overtaking another car and closed in on Dwayne.  I could swear he was driving like this intentionally.

I glanced at myself in the mirror. Yes, I bet he was forgetting how I looked.

Dwayne directed me toward the visitors parking in Tanya Toogood’s apartment block.  I then waited patiently by the elevator while he parked. When he did walk up to the doors of the parkade elevator he carried Tanya’s golf clubs as though they weighed no more than a few pounds.

I looked at Dwayne in the dim light and noticed the steam piston biceps. I’d seen them before of course, but in this fetching pale shirt and carrying the weight of the bag so effortlessly I couldn’t help but be a little impressed.  Not that I really like that sort of thing.  After all, all the brawn in the world couldn’t make up for the gentle resilience of some women. Women like Devina. Persuasive, even a little cruel, but above all commanding.

My eyes drifted back toward Dwayne.  I supposed if he were not such an utter pig and completely at Devina’s disposal (with all that meant), I could find him attractive in a vague and primitive way. As he turned to smile at Tanya my eyes slid down his body to his tight buttocks, so nicely framed by the designer jeans.  I smiled in satisfaction, only to notice Tanya looking directly at me and realising precisely what I was doing.

What on earth could she want with me, I asked myself. A ‘chore’. Was I to unblock the bathroom sink while she and Dwayne had a cocktail in the living room?

I could almost feel her reading my mind and realising that I was observing Dwayne with the eye of a lover. She gave me that crooked smile of recognition as if to say, “I know what you’re doing.”

I turned away and then stepped into the elevator as it arrived. A few moments later we were walking into Tanya’s apartment.

I looked around and stood wondering what to do, but Tanya’s voice sailed back from the kitchen, where she was preparing a cold drink.

“Put it in the bedroom,” came her instruction.

I wondered what she meant, but then felt Dwayne grasp my elbow. His grip was strong, but not rough. He simply guided me through a door, my legs taking me though I’d not given it any thought.

Dwayne pressed me down, and as I fell to my knees he took a heavy collar from a nearby closet, and fastened it around my neck.

“What is this?” I asked, but my question was met with a loud silence as Dwayne continued about his task.

Apparently I was the ‘it’ in question. Dwayne drew out a piece of heavy chain from beneath the bed and attached it to the collar before securing the other end to the bed. I found myself on my knees beside the crisply made bed, unable to stand.

Dwayne then left the room, leaving me secured like a pet dog waiting outside a store. I asked myself what on earth this could be all about, and not liking any of the responses that flooded to my mind. I could hear the chatter in the next room as Dwayne and Tanya enjoyed their drinks, oblivious to me.

After a few minutes the chatter died down and was replaced by softer sounds and shortly the door opened and I watched Dwayne kissing Tanya as they entered the room. What happened next was the last thing I expected.

Tanya fell back on the bed, her head inches from mine. She raised her hips and pulled away her skirt. Dwayne swiftly pulled off her panties, encouraged by her movements and grinding against his hard body. I watched as she pushed his head down to her breasts, then between her legs and she began to moan. Her soft dark pubic hair ground against Dwayne’s hungry mouth, a picture of hard and soft passion smearing deliciously against one another.

Throughout this exciting display it was as though I were not even there. Dwayne went about his task without looking at me, or even acknowledging that I was in the room. Tanya however was quite different. As she enjoyed Dwayne’s oral talent she turned her face toward mine, so close I could feel her breath as she gasped in response to his touch. She’d open her eyes for a moment, as if to be sure I was watching this, witnessing her pleasure.

As I noticed Tanya’s attention come toward me then fleetingly vanish I realised I was not here to participate, but to witness. Dwayne flipped her over and as she got to her knees she took another swift glance at me, confirming to herself that I was indeed watching. I could not have turned away if I’d tried.

I saw as she reached behind her, feeling the length of his shaft. The sigh of pleasure as she felt the length of him in her hand. Then the smile as she guided this enormous member into her eager body, sliding back against him in a heated display of satisfaction at the size and condition of Dwayne’s dick.

I tried to look away, but the sight before me was so compelling I couldn’t. I found myself thinking it had only been a matter of months since the thought of watching a man fuck a woman held no appeal, but for an addition to seeing the woman’s passion and pleasure. It came as a disturbing revelation that now it was Dwayne that I found so compelling. I could barely move my gaze from him, as he worked so diligently to satisfy Tanya.

In the one moment of acknowledgement of my presence, between deep thrusts into her eager body, Tanya turned to me and staring right at me said casually, “He’s magnificent, isn’t he.”

Before I could respond she turned her attention back to Dwayne, and I knew any thought of response was futile. In those few words she spoke volumes. She’d made it quite clear that this was all about me admiring Dwayne, proving to myself that I was now so far down this murky road there was no turning back. She had confirmed that whoever I thought I was, I would never be the person that only a few months earlier was so trapped inside society’s conventions. Whatever I had morphed into my life would never be the same.

As their lovemaking continued loudly I ached to be Dwayne’s object of desire. On my knees I watched unable to draw away, until at last my eyes fell to the summer dress I still wore. The tightness of the cage as my dick tried in vain to harden seemed not to matter. At last I knew I was here not for Tanya to play with, nor for Dwayne to gleefully rape. I was here at Devina’s instruction to witness my own condition and to accept my new truth, that any pretence at male sexuality for me was gone forever.