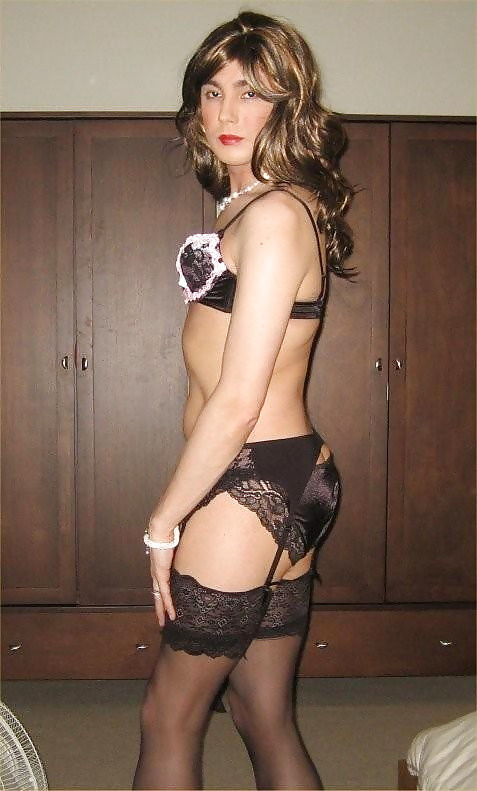 I could hear voices in my living room.  There was a little light laughter and I could tell that Devina and her guest were making themselves comfortable.

I found myself flushed and felt my heart racing.  I ran the tap and put my wrists under it, the cool water calming me.  As I looked in the mirror I could barely recognise the face that looked back. Devina had done a masterful job on my makeup.

The suspender belt around my waist felt firm, the nylons wonderful and the material of the short skirt felt good against my legs. I wore some black panties, full, and enclosing my carefully hidden cock.

Again, the laughter, and then Devina calling, “Andrea, come along.  Don’t be shy dear…”

I felt my heart pounding. The collar was tight on my neck, but I didn’t want to loosen it. In a strange way it felt reassuring.

I stepped gingerly in the heels toward the door, as I reached for it I found it swung open and Devina was standing there.

“Now, come on out and meet Dwayne, and don’t be shy,” said Devina. Her voice was firm, leaving no room for argument. I remembered what she said, and with eyes cast down kept my mouth shut. I could feel the glossy ruby red lipstick on my lips. With each step out of the bathroom I took, I felt more frightened.

As I looked up I saw an enormous young colored man. He was a magnificent looking individual, and likely a quarter back, or some other powerful athlete. As I looked at him two things rapidly rushed through my mind. The first was that physically he was much more powerful than I. He could do whatever he wished with me, and I was virtually powerless to prevent it. It was a strange thought. Both frightening and exciting at the same time.

The second thought was that I wanted him to want me.  I wanted him to use me. I wanted him to force himself on me and use me in whatever depraved manner his mind could devise – and I would be grateful. Yes, I admit it. I thought only of how he could master my weak, feminine form. And how I wanted that master. My breath quickened as I looked him in the eye.

“Isn’t she just adorable,” said Devina, and laughed. “I know she’ll be very happy to serve you. Particularly your ‘special’ desires.”

I wondered what she meant by that. But rather than making small talk, this young man was stripping me naked with his eyes. How demeaning it felt, to be looked at in that way. I felt myself being sized up and assessed.

Devina went on, “Now, Dwayne, as I said, I don’t want you to feel you have to be gentle. Far better to be as forceful as possible. It gets them used to it more quickly. They love it.”

With that Dwayne step forward and took my collar firmly in his right hand and pulled it firmly downwards. I was first bending and then brought to my knees, my face level with his tight jeans, the zipper right in my face. It was all happening so fast. My heart was racing and I didn’t dare speak.

“Well, bitch, don’t you know what you’re supposed to do?” His voice was commanding and deep. I looked straight at his belt buckle. There wasn’t any mistaking what had to happen next.

I undid the belt buckle, loosened the button, and worked Dwayne’s pants down. He wore plain tight black briefs. I don’t know if it was the pill Devina had given me, or if things were really happening in slow motion, but I found myself unable to look away from the swollen bulge in his briefs. Really, I just couldn’t take my eyes from it.

“Awww…” crooned Devina. “Look, she can hardly help herself!”

I found myself licking my lips in anticipation as I pulled the waistband of his breifs down, and an enormous (wonderfully enormous) black dick sprung out at me, now free of it’s restraining fabric. I found myself gasping in surprise, and delight. My mouth fell open and I stared. This was amazing.

I opened my mouth and carefully put the head of his dick in my mouth. I felt Devina behind me, he hand on my hair.

“Open wider, Andrea! That’s it. Now relax your throat. And ease him into you. That’s better!” Devina forced my head forward and this time the unrestrained force of Dwayne forcing himself into my throat took my breath away.

I began to choke and gag. Devina pulled my head back, bent down and struck me forcefully across my face.

“You will not resist, Andrea. That dick is going all the way down. When you feel his balls on your chin then, and only then, can you let up. And be sure to thank Dwayne for being so good as to let you suck him!”

I mouthed thank you, my eyes wide then opened my mouth and found my head being forced forward once more. As I felt myself gag, I pushed deeper onto his magnificent dick. I swear I felt it move into my throat and suddenly quite easily go much deeper.

“Now, isn’t that much better!”

I kept working away at Dwayne’s magnificent cock, loving it, worshiping it, and wanting to feel it burst into my throat. I felt him getting more and more excited, and thrilled at the way I felt. I could still feel the but plug in my ass, but became increasingly aware that I needed something much more inside me. Would it really be possible to take this enormous man inside my pathetic boipussy?

Devina said to me, “Now, Andrea, I think you should leave some for the rest of us, don’t you?” She laughed, aware that I was completely carried away with the moment. “Why not pay some attention to Dwayne’s balls. I think you’d both like that.”

“Suck them, baby,” he told me, and I was powerless to refuse. Even had I wanted to resist, he would have forced me, but I did not. I could not. I need to worship that dick, and I wanted only one thing. To be slaved to the power of that irresistible member, and to feel it run right through me.

If I try to explain the compulsion I experienced in that moment I can barely hope to convey the power of it all. My thoughts were filled with but one idea. I must have it. I must!

Shortly I felt Devina pull the collar and I was dragged from my sucking and licking, still on all fours. Devina was pressing down on my shoulders, forcing me to press my chest to the floor, while my ass remained raised.

“Come along, Andrea. Are you being shy? You know what Dwayne want’s don’t you?”

I looked at him over my shoulder and nodded shyly.

“And I think you’d like that too,” she laughed.

I nodded vigorously, and eased my knees apart in anticipation. I was really looking forward to this. Imagine feeling the hard and hot shaft pushing first against me and then inside. Oh my god, I thought. Do it now!

Devina pulled the skirt higher, around my waist, and then, laughing derisively she pulled my panties down. Can you even imagine the humiliating vulnerability I now felt? Worse, I realised I was enjoying the sensation. How could I be such a whore, I wondered as Devina cupped my balls, and laughed.

“I think we’d better prepare you properly, Andrea. I have some lube in my bag.” She reached over and took some lube from her petite little handbag.

“Don’t you think she looks sweet?” She said, and I glanced over my shoulder as Devina began rubbing the slick fluid between my buttocks. “Now Andrea, I want you to keep in that position when Dwayne starts to play with you.  In fact, it might be a little better if I just squat down on your back, so you don’t squirm away. You know – the pleasure can be so intense you may try to fight it.”

With that I felt Devina settle onto my back, forcing me to remain, ass high and face pressed to the floor. I could feel the heat of Devina’s crotch pressing into the top of my neck. It was exquisite, humiliating and amazing all at the same time.

While Dwayne’s cock had been in my mouth I had been aware it was large, but it wasn’t until I felt him brutally push my buttocks apart, then press his dick against me that I got the true sense of the size of him. I tried to look round at the enormous object pressing hot against me, but Devina’s foot was all I could see beside my cheek. I squirmed and whimpered.

“Oh god,” I groaned. Immediately I felt the sting of a slap on my back from Devina.