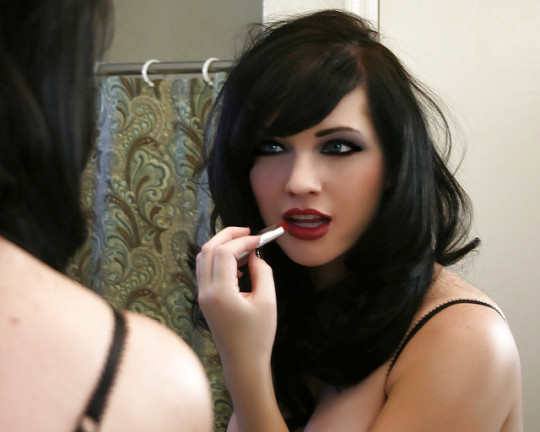 Faced with the threat of blackmail and exposure, reluctant crossdresser Andy is forced to confront his conflicting desires. On the one hand, playing along with Devina’s filthy plan would be dangerous and could make things worse, but on  the other his curiosity and secret wish to take things further was growing with every passing moment.

“I suppose I could…” I found myself saying.

“Of course you can. Now, let’s get you ready, shall we?” said Devina.

I don’t know what came over me. I suddenly not only wanted to see what might happen, I actually found myself craving the thought of being there, for some random man. He would doubtless take me, probably violently and use me like some kind of, well, tramp. And the thought excited me.

I tried to stop myself, “Devina, how could you do such unspeakable things to me,” I stammered. “And now this?”

“Andy, or should I say, ‘Andrea’, don’t be so silly.  You know it’s what you’ve been wanting. It’s what you’ve always wanted. Now, go and have a quick shower. Do it now! I’ll help you get ready.”

I walked as if in a trance to the bedroom and slipped out of my clothes. I could hear Devina moving around, the sound of bags being opened. It was as though I were in a daze as I showered, and thought to myself, “Why am I doing this?”

And the answer came back, “Because you want to!”

After I’d toweled myself off I was about to step into the living room, when Devina walked into my bedroom. She was bold as brass, and I just sat there on the bed, a towel over my groin, and waited.

“We’ll put a little makeup on first. I think that will make things go more smoothly. You know, you look really quite passable when you wear the right shades of makeup. It’s quite impressive really.”

“Oh, be quiet.” She sat opposite me and began applying some foundation. “Close your eyes and relax. Besides, you’ll enjoy it.”

“Oh, never you mind,” she said as she busied herself brushing some blush on my cheeks. “All you need worry about is being here for him.  That’s all he wants.”

“Look,” she said, reaching for some eye makeup, “it’s not like you have to make conversation with him.”

She handed me a pill.

She put on a mock frown and then said, “It’s just a muscle relaxant. Believe me you’re going to want it.”

Devina had got to her feet, and opened a bag on the bed. It contained a blonde wig, and some lacy lingerie. There were nylons, panties, a bra and a suspender belt. There were other things, too. Just looking at them made me excited.

“Andrea, when he pushes himself hard against you, believe me you are going to want to be very relaxed.”

I thought about this for a moment and then took the pill from her outstretched hand. She walked intot he bathroom and returned with some water in a glass.

“I think you’re secretly looking forward to this, aren’t you?” She smiled at me.

“Yes, I knew it,” she laughed, and continued preparing me.

She worked on my makeup about ten minutes longer, and then began dressing me. I felt quite light headed as she put a bra on me, and placed two silicon forms in place of my breasts. She made me stand, put the flimsy suspender belt around my waist,  and then I felt her pull my cock down and tucked it, as she had me step into a paid of black panties. She did it all quite unselfconsciously and without a trace of anything but business like efficiency. She handed me two stockings, and told me to put them on, while she went next door to find some heels.

She returned with what she’d been looking for and I stepped into the shoes. The sensation was wonderful, as I put my shoulders back my little breasts looked quite perky, and I stood to my full height. I guessed I was about 6 foot 3 in the heels.

“You look very passable, Andrea,” she said.  “There’s really only one thing missing.”

Devina disappeared back to her room and I heard her rummaging in a bag. A moment later she returned.

In her hand she held a butt plug.

“Bend over,”she said. “This is going inside, whether you like it or not.”

She pulled a tube of lube from her pocket, put some in the palm of her hand, and in one swift and irresistible motion pulled me forward onto the bed. Lying on my chest I felt her bony knee in the small of my back and felt her slide her hand down the back of my panties, slippery and wet, and then I gasped as her finger slipped deep inside me.

“You will do as you are told, and you’ll be quiet about it. From now on, you don’t speak, because your voice is too high.”

He fingers first massaged and then plunged deeper into me. Two, and then three. I gasped, and thought, she was right about the muscle relaxant. Open mouthed I moaned, as she reached over and took the plug.

“Now,” she said, “I want you to work yourself back onto this and look as though you’re enjoying in.”

I made as if I were to speak, and a stinging blow shut me up.

I nodded and began backing against the improbably large plug. I groaned as I felt the plug stretching me.

“Be quiet, unless you want me to force things along.”

I decided to shut up. I was feeling more stretch than I’d ever felt before, but as I felt the pain, I also realized I was savoring it.

“That’s it,” Devina said. “You’re almost there. Just think of it as something to warm you up for that big hard cock.”

As the plug slid home I let out a gasp. It felt strangely filling. I wanted something more though. I wanted the heat of a real dick. I was almost sobbing for it.

“Soon, baby girl,” Said Devina, as she handed me a light skirt. “Soon.”

She stood and straightened her clothes.

“I know,” she said sympathetically, putting a collar around my neck.  “You can’t help yourself, can you. You need cock now, don’t you.   It’s usually like this, you know?”She snapped a dog leash onto the collar.

I looked at her quizzically.

“You sissies can’t bear to be without cock once you dress and have a plug in.  It just becomes an obsession. Soon you’ll do anything for it.”

At that moment the buzzer rang out, and I almost ran to the door. I wanted nothing more than to see what was in store for me. Devina jerked back the collar.

“Don’t be so impetuous,” she said. “You forgot your wig. Go to the bathroom and put it on. Come out when I call for you.”

I nodded and went to the bathroom. The muffled voices next door were driving me insane with excitement.

“Andrea,” came Devina’s voice. “You can come out now!”