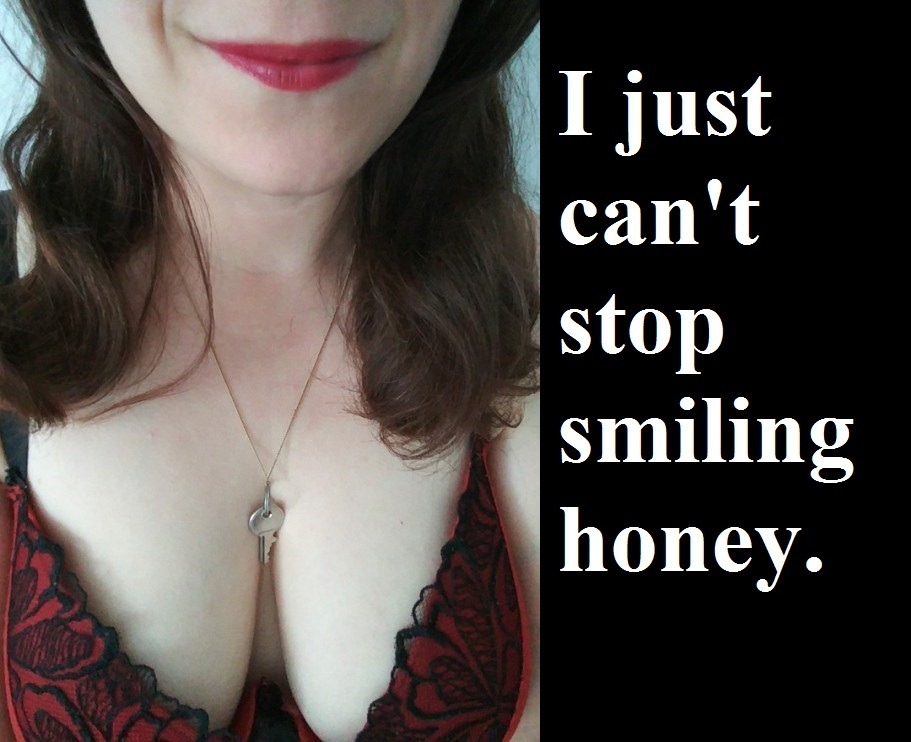 Forced to dress in a maids outfit and serve one of Devina’s friends, Andy learns the meaning of ‘service’.

I was led to a table of drinks, a silver tray placed in my hands and as I teetered along on the impossibly high heels, I was instructed by Chantelle to circulate and distribute the drinks. A few canapes and vol-au-vents were added and as I moved around the room, I would be summoned and the tray gradually emptied.

I returned to the serving station and refilled the tray, before beginning another circulation of the room. It was only a matter of time before I would be brought face to face with Mandy, my girlfriend, who was now intimately engrossed in a conversation with a pretty young woman who seemed very much acquainted with Mandy’s ample breasts. The young woman seemed to caress and stroke her very freely at every opportunity.

I could not help but notice how she laughed at Mandy’s quips, leaned into her as she spoke and from time to time would whisper in Mandy’s ear. A smile would cross her face, and a little giggle. In fact, I could say without a doubt that Mandy was a very different person in this particular group of people.

As I looked about the place it was quite evident I was the only man in the place. I say that, but as you are doubtless aware I was dressed in a maid’s uniform, a very short skirt, wearing ludicrous heels and a leather hood. Beneath my skirt there remained the heavy steel chastity device so mercilessly applied by Devina, whose name I silently cursed through a ball gag with every drink I served.

Returning to the nature of the guests, I should point out something I did find quite peculiar. While all these women were intimately familiar with one another, they did seem to be quite respectful of each other. It wa only my presence that was treated with disdain. I was clearly a lesser mortal, but one to be ignored rather than punished. I could see that these people were at once comfortable with each other, and also quite relaxed. My presence was to serve, as I’d been instructed. The guests really were disinterested in this curiosity that circulated serving drinks.

The energy of the room was quite pleasant. It was a little like any other party, but lacking in a certain predatory male energy. Instead a calm, jovial and gentle atmosphere seemed to pervade the place. I find it strange to write, but in truth it was really rather pleasant.

From time to time I could see Mandy, and on one occasion she caught my eye to serve a drink. She was quite oblivious to the fact that I was the object of her affections – or so I had thought. I caught sight of her in a long passionate kiss, at one moment, and turned quickly away. The stabbing sensation in my chest was matched by a constriction in the chastity device that was far from comfortable. I was completely unrecognizable, evidently.

My conflicted feelings about Mandy, both lustful and repelled by the awareness of her duplicity, wrestled with each other to gain an upper hand. I resigned myself eventually to get through this evening as best I could. An object yet also a witness. I may be dressed as a maid, my manhood caged and my face covered, but if you cut me do I not bleed?

The following two hours will probably go down in my memory as the strangest of parties I’ve ever attended, in any capacity. I was both a functionary and objectified. I was both useful, and worthless. And strangely I found a place in my mind that almost enjoyed it.

At one point one of the elder women walked up to me, took a glass of sparkling wine, and whilst looking me in the eye reached down between my legs and squeezed. She smiled, and turned to one of her companions and said, “It’s true. It’s caged! How very sensible.”

Beyond that I really was merely a server. In service there is great satisfaction, in some strange way. At length I was recalled into the room in which I had changed. Chantelle directed me there, and then joined me a moment later.

“It’s time for you to leave,” she said. “You’ve done well. I am somewhat surprised. Devina seems to have disciplined you well.” She fingered the brown envelop she’d drawn out of her bra.

“I suppose you’ve earned this,” she said and tossed it to me. I caught it and felt the key within. Opening it swiftly I recognised the tiny object. In a moment of modesty, I turned and fidgeted with the lock, masking myself from Chantelle and panting with relief.

There was a satisfying springing click and the tiny padlock released, and the device fell open.

I’d slipped silently from the party unseen. Chantelle had surprisingly asked if I would like to come back again, and even more surprisingly I said I might. Far from a trial, I’d actually enjoyed the process, as unexpected as it had been.

As I drove home, pleased to be free of the constraints of the past days, I remembered that I should be calling Mandy. Of course, she was at the party, but I was not supposed to know that. I thought about this for a moment, and then instructed my phone to call her. I was promptly put to voice mail.

‘Hello Mandy, just wanted to say that I hope the book club went well. Be sure to give me a call I’d love to get together over the weekend.” As I rung off, I considered the fact that it was high time I re-evaluated some of my relationships.

At home in my apartment I felt some sense of normality for the first time in weeks. Devina’s ridiculous chihuahua Trixcie dozed in the corner after her walk, and I wore a floral gown and some pink fluffy slippers, but other than that I was practically a normal person! I put the party far from my mind, watched a delightful natural history program with David Attenborough talking about flying foxes, and watched the magical images of the creatures leaping gracefully from tree to tree until at some point I fell into a deep and restful sleep.

The following morning I was woken by the sound of road works. Even on the upper floors of the high rise apartments the sound of roads being drilled seems to drift upwards and enter the bedrooms of those of us silently sleeping away the servitude of the previous evening.

After a quick breakfast I did a little yoga, without the disconcerting clunking of steel every few motions, and then took Trixcie out for her walk. I suppose in some ludicrous way I was even finding a level of affection for the ridiculous dog. We walked around the park by the river, and I threw her ball, which she manically chased after.

I supposed that being in a high-rise apartment must be a rather odd episode for little Trixcie. Devina’s house was quite large, and doubtless she had the freedom of the garden during the day. To be couped up in the apartment ten stories up must seem most constraining for the little girl. I supposed we all have our constraints, of one type or another.

As I walked back to the apartment, the sun shining brightly, two construction workers were flagging an enormous cement truck into position parallel to a trench in the road. I picked up Trixcie and hurried across the road. It would be most unfortunate if she met with an accident after all we’d been through. Crossing the street I found myself walking beside two young women, and the construction workers eyed us with interest. I glanced at the girl beside me, taking in the short skirt, the tight sweater and the scooped neckline. I don’t think the workers were looking at me.

Once in my apartment I sat at the computer and answered a few emails, put on some relaxing music and checked the business news. I was caught up with work, and found myself with a rare few moments of idle time. In moments like this there is of course only one thing to do. I went to my room, slipped off my jeans, and pulled on a skirt. A moment later I had tights, a sweater and heels on and felt wonderful.

As I stepped out of my bedroom I noticed Trixcie’s ball on the floor. With a graceful skip, I kicked the ball playfully, and it sailed across the room accompanied by barks and Trixcie scrabbling about to play.

The ball arched in a gentle trajectory to the bookshelf, bounced, hit the wall and then ricocheted off a heavy vase closely followed by Trixcie sailing through the air to intercept. That was when I noticed the open window.

The flying fox is a mammal native to Java. Technically it’s a type of bat. As Trixcie fell from the tenth story of the apartment building she looked exactly nothing like a flying fox. She looked like what she was; a chihuahua falling like a brick from the upper levels of an apartment building. As luck would have it she landed in the wet cement which had momentarily been poured from the cement truck, with a plop, audible to no one. I fancied I saw her lift her tiny head, the ball triumphantly in her little mouth, doubtless thinking what a surprising journey she’d just had, just as the operator pulled the lever and several hundred gallons more wet cement poured into the trench.

As quick as I could I kicked off my heel, grabbed my keys, raced to the door and punched the elevator button. Nothing. I ran to the stairway and flew down ten stories of apartment building like a crossdressed banshee, and emerged onto the sidewalk, to the surprise of several construction workers. They stared at me, as I panted and looked into the trench, now full of concrete.

I gasped, out of breath from my running. Trying to get the words out, I turned to one of the construction workers and said between gasps, “I think there’s something in your hole that shouldn’t be there.”

He looked at the concrete, and then back at me and replied, “Buddy, I could probably say the same to you.”

It was no use. There was nothing to be done. I mournfully returned to my apartment, turned off the music, stripped down and stepped into the shower. I tried to wash sweat and the shame and ignominy of being a dog murderer from my body, but it was no good. I felt like a cross between Hannibal Lecter and Lady MacBeth. No matter how I scrubbed, the feeling wouldn’t go away.

I stepped from the shower and dried myself. As I threw myself on the sofa the thought crossed my mind that every time I crossed the road I would be stepping over poor Trixcie. How terrible.

My cell phone buzzed, signalling a text. I read it with dread.

“Good news. Heading home early. I should be able to pick up Trixcie later today. Devina.”

Join me as a Good Gurl member to support my work..