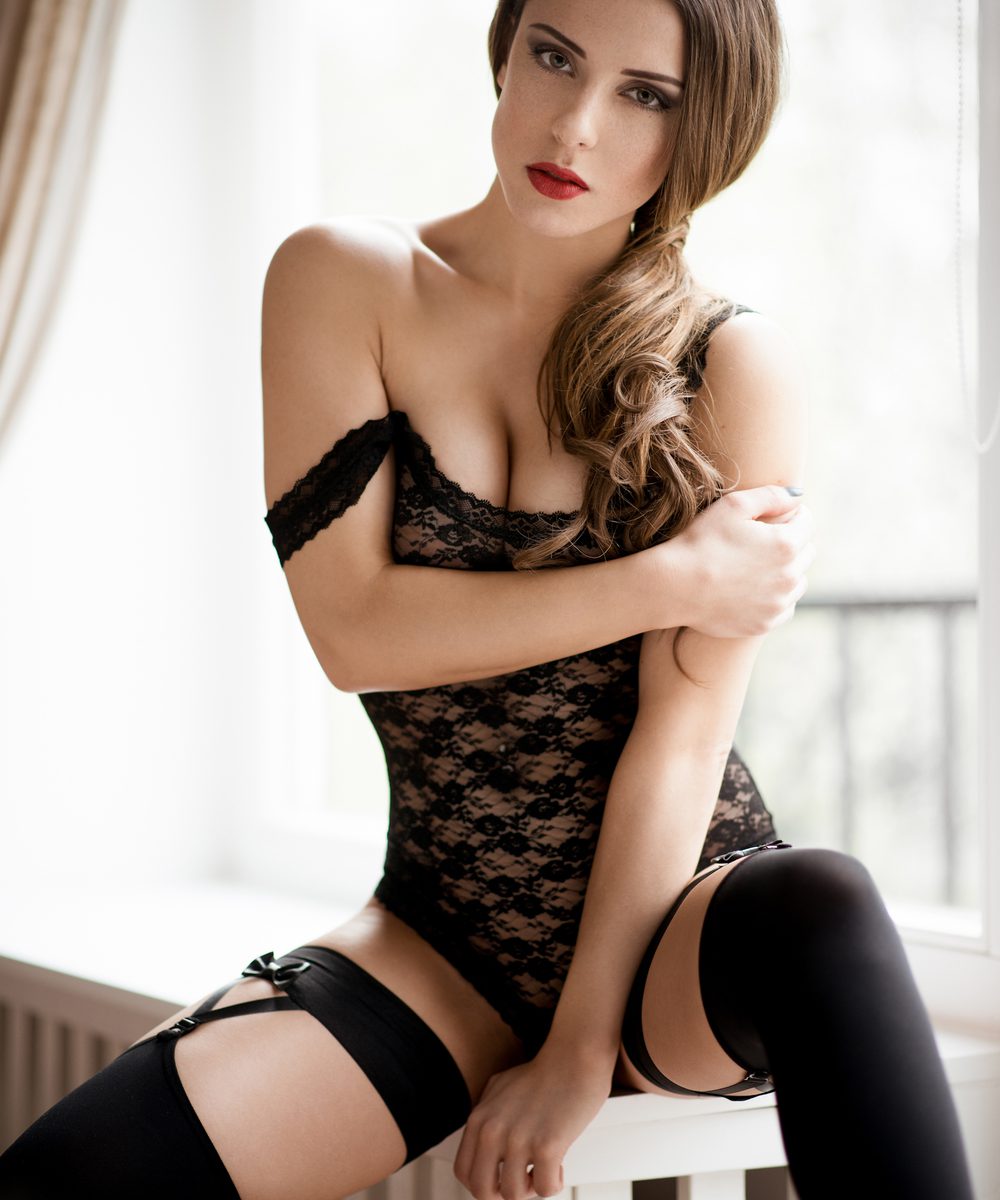 Part 1 can be found HERE. Find all episodes of The Dating Game HERE.

When David – AKA Diana – puts on the clothes he’d bought to go out dressed on the ski slopes Diana comes alive. This holiday on the slopes is going to get very hot.

David didn’t think he could do it, even after spending a fortune on tight-fitting ski pants and a mink coloured padded jacket with a fur-lined hood to die for, plus a pair of tortoise-shell Ray-Bans where the salesman had obviously seen him coming! There was no way Diana could go skiing in the French Alps.

But here she was. Standing in the boot room complete with hair gel, lipstick and mascara. No one batted an eyelid. The waiter had even held the door open for her at breakfast this morning.

David grabbed his skis, ran his tongue over lips coated in ruby red lipstick and headed onto the slopes for another day cruising down snowy mountains, with only the swishing sounds of his skis for company.

Why hadn’t he done this before? Under his helmet and behind the extortionately priced optical accessory, David was incognito. When he stopped at a busy mountain restaurant, parted from helmet and sunglasses, Diana was still inconspicuous. Fellow skiers were too busy finding a table, slackening off ski boots, removing helmets, jackets and all the other paraphernalia compulsory to the ski-set, to notice a solitary member of their ilk sitting in a corner enjoying a hot chocolate. Nobody else saw the trace of his lipstick on the cup. It was a sight to please David alone.

For the last run of the day, David hurtled down the black run to his hotel. At the bottom his phone pinged. He had been expecting a message and struggled with impatience to get his gloves off and check the screen.

He headed to the hotel. He hadn’t expected her to accept his invitation to join him in the ski resort. When she did accept, he was sure there would be some last minute hitch—a student suicidal because they couldn’t remember the fourth canto of some poem by 17th century poet, Jean Chapelain, perhaps.

But when he strode across the reception area, there was no missing the person waiting for him.

At the bar, dressed in tight fitting black leather trousers and a soft grey leather jacket, sat the professor of French literature, Madame Sandrine Lafayette, sipping her gin and tonic. Deep red lips formed a wide smile as she caught sight of David. Those same lips left a perfect image on both his cheeks as she greeted him with a certain lascivious enthusiasm.

“Bonjour, ma belle amie.” With the tenderness of a lesbian lover, Sandrine smoothed the lipstick over each cheek with her forefinger.

For an instant David’s eyes darted from the French woman to the bartender to the group of friends playing cards at a nearby table. The bartender caught his gaze but immediately turned away and began polishing what appeared to be an already sparkling wine glass.

The feel of a warm hand on his brought David’s attention back to Sandrine.

“What will you ‘ave to drink, ma cherie?”

She was referring to him as a woman. The barman gave him his attention once more, but only to hear what he wanted to drink.

“Oh.” He stared at Sandrine’s glass. “The same, please.” Of course, he regretted this sudden inability to think for himself as soon as he tasted the iced white liquid. He hated gin. Get a grip. But when her grasp of his hand tightened, and she led him over to a table on the far side of the room, where they were completely alone, he was glad that Sandrine was taking control.

David hadn’t seen her since she was last at the university where he lectured. He and his friend, Lucy, had soon discovered that there was a dark side to Madame Lafayette. A side with a force to be reckoned with. The gin may taste crap but it was still alcohol. He took a large gulp.

“Have you checked in?” he asked.

“Oui. My luggage is in my room.” At this point she licked her lips and held his gaze.

David blinked, wondering what might be in her ‘luggage’.

Not yet! “Oui…I mean, yes. There’s a great red run down from the ice sculpture park, and the black down to the hotel is wicked.” Wicked? Where the hell has that word come from? You’re not bloody 18! But David knew exactly where that word had come from. He was about to spend the night with Sandrine and he hoped for more than the thrill of a black run…

After a quick shower David pulled on his lilac laced camisole and slipped his package into matching lace panties. Then he slid a soft grey cashmere dress over his head, running his hands over the smooth fabric and easing out the little wrinkles that had gathered over his hips. With legs as well waxed as his skis, he left them bare and slipped his feet into black, low-heeled, strappy sandals. Applying his makeup had become second nature to him and he admired his reflection. Diana looked great and was going to have an evening to remember.

Mustering a confidence he hoped wouldn’t desert him, he knocked on Sandrine’s door.

The vision of the French woman clad in tight black leggings and a Christmas red vest top knocked the confidence right out of him. He glanced down at dagger-heeled boots and felt weak at the knees.

“You look wonderful,” Sandrine declared, her eyes sparkling as she scanned every inch of the body in front of her. Quick to discern that her guest needed a push to begin the slippery slope to paradise, she took hold of his hand. “I ‘ave a surprise for you.”

A bottle of champagne sat in an ice bucket, accompanied by two crystal flutes, a dish of olives and assorted canapés. This wasn’t particularly surprising as neither of them had been down to dinner. But on the front of the table, in pride of place, was a rectangular box covered in powder pink velvet.

David was intrigued. He watched Sandrine pour the champagne and tried to focus on the tiny bubbles rising up the glass she handed to him. He swallowed before the liquid even touched his deep red lips.

Slowly David sat back on the sofa and crossed his legs. The dress rose up, revealing his knees, and he regretted not wearing stockings. He felt vulnerable with inadequate layers of protection, layers of femininity. But when Sandrine ran her hand over his knee, the feathery touch both soothed and excited him.

She held an olive to his lips and David sucked it in.

“I adore to ski through the trees.”

They began to nibble the canapés and sip the champagne.

“And isn’t it great to ease your feet out of those boots and remove all those layers, to set your skin free?”

“I guess so.” He placed his plate on the table to signal he had eaten enough and glanced at the box.

“How about we set your skin free now?” Sandrine stood over him.

Her hand raised him to his feet, and he was beginning to feel exposed even before she she peeled the dress over his head. Then her fingers touched the hem of his camisole and he froze.

“I—I leave this on,” he stammered, staring at the top which symbolised his lifeline to Diana. He had five of them in his drawer and had purchased tens of them over the years. The top had become both a symbol of the gurl inside him and a layer of protection. The web of lace was his armour, shielding breasts he didn’t have and nestling over his smooth chest, brushing softly against his caramel nipples. With it he felt divine. Without it he felt…wrong.

But Sandrine had other ideas. Her hands began to lift the top above his head. “Tonight, you do not need this. I will cover your body.”

He placed his hands on hers. “I don’t think—”

“Exactement. Don’t think. Don’t think about it. I will do the thinking. I will make you feel beautiful, not your top. Lift up your arms.”

Feeling compelled to obey, David raised his arms and soon he was naked. He waited for Sandrine to touch him and couldn’t dismiss a pang of disappointment when she didn’t. This evening wasn’t going to plan. He wanted to be Diana but felt more like David. Had it been a mistake to invite her here?

As she turned her back on him David battled with his urge to flee from the room. But how could he? He was starkers. He took several deep breaths and began to recite in his head an equation from a paper he had written recently. This did nothing for his libido but at least he was still here.

Sandrine opened the pink box, and David stared at rows of coloured creams and a variety of brushes.

When she faced him she was holding a thin brush. What the hell is she going to do with that? David’s deep breathing quickly morphed into bated breath.

“Ah, I forget.” Sandrine strode over to her bag and withdrew a black eye mask. “My surprise,” she whispered as she pulled it over his eyes.

With an artistic sweep Sandrine drew the brush over the top of David’s chest. He flinched as the bristles tickled his skin.

He moved his feet apart to stop himself from swaying.

Satisfied with the top half of her artwork, Sandrine fell to her knees, dagger boots still in situ, and began to focus on David’s lower body.

He managed to stand perfectly still. The regret of losing his camisole was replaced by the carnal pleasure of being Sandrine’s canvas.  David waited for his whole body to be stroked by her brushes. He was rock hard and longed to reach the top of his own orgasmic mountain and gush forth an avalanche of white liquid before devouring Madame Lafayette as his ice queen dessert.

But there were no more brushes. This time it was small hands which smeared cream over his hips and thighs, cock and balls. David swooned. He’d left the white mountains of the French ski resort, and was drifting in the white clouds of a passion-filled heaven.

When Sandrine had completed her task, she placed her hands on David’s shoulders, ready to direct him. “Move over here.”

“Okay. Open your eyes.” Sandrine stepped back. “You like?”

David stared at his reflection. Oh yes, he liked. His body had become a work of art, and it’s master was standing right behind him. Sandrine’s strokes had recreated his beloved lilac top, and the French knickers completed the picture. The effect was visually feminine and sensorily tactile. David shuddered.

Sandrine reached her arms around him, and moved her hand lower. She lifted her leg and dragged it up his body, reminding him that she had the ability to rest the dagger boot on his shoulder.

Leaning back for a kiss, he placed his hand between her legs. He began to melt at the feel of her, but not before uttering, “Don’t smudge me.”