How you think about yourself is as important as the aesthetic of dressing. Here’s a great exercise to help you think in ways that will allow your feminine self to emerge. Give it a try.

You can find more of my content at http://Patreon.com/fionadobson​

Should you wish to find some great ideas for androgynous clothing check out my Pinterest here – https://www.pinterest.ca/fionadobson2…​

An essential guide for crossdressers.

It’s Playtime With Fiona and today we’re look at breasts.

So many of us look at drag queens and wonder just what that is beneath their lovely fabrics and designs. And as a crossdresser wanting to look their best, of course we want to get our hands on them!  Well, here’s the short story on what’s going on.  Enjoy this offering and be sure to explore the website thoroughly. Here’s a good place to start – https://fionadobson.com/site-guide

Well, I feel quite awkward about sending you this message. As you may know, Max – my neighbors son – has been job shadowing at my work for a little while. The advertising agency is very good for this, but what happened today was quite beyond my experience. I feel I have to share. 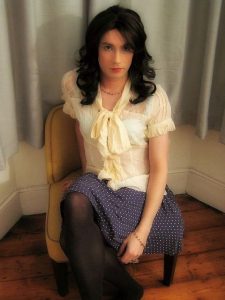 Max had his young friend Micheal drop by the office. Rather than hanging around like a great goon, while Max finished off what he was doing, Micheal worked on something on his computer in my office. As it turned out, Max was tied up and had to work a little longer than anticipated, so his friend sat at the table in my office working away at an assignment for college. He was doing some sort of graphics training.

I was wearing a very thin pale blue blouse, my navy blue bra visible through it. My skirt was also rather shorter than strictly necessary, though no one had ever complained. Either way, what transpired was probably predictable.

I remember clearly freshening up my eye makeup, and glancing in the mirror of the compact as I applied a little more golden glow, noticing the way Micheal was staring at my behind. The only word that comes to mind is ‘drooling.’ One does get used to this.

Throughout the afternoon, now and then I would look up from my work and several times I caught Michael looking at me in a way that can only be described as salacious and lustful. Now, Max has way too many hormones dancing around inside his pants, but manages to control himself, even if I do tease him from time to time. I enjoy giving him the wrong end of the stick now and then and metaphorically giving him a good poke with it. After all, we all love a good poke. However, his friend Michael seemed positively entranced by my figure and unable to take his eyes off me.

I could see his furtive glances were drinking in my shape each time he secretly glanced at me. I could see him getting increasingly uneasy, and shifting awkwardly in his seat. I shot him a smile, as I worked and he blushed. This was all rather cute, until he got up unsteadily and walked over to my desk.

“Fiona,” he said nervously. I could see he was terribly anxious.

“Micheal, darling, what can I do for you,” I said as gently as I could.

“It’s ok, Micheal. You can say anything you want to me.”

He leaned into me and with the greatest of efforts spoke slowly and said, “I want to use your mouth.”

I was more than a little taken aback. I have been approached in many situations, and actually enjoy be propositioned, but this seemed a little odd.

I collected my thoughts and then said, being careful not to offend, “Just hold that thought for a moment.”

I slowly got to my feet and walked quickly out of my office to the coffee room, where I found Max loitering.

He looked at me quizzically and said “Yes?”

“Micheal,” I said slowly, “Is he… Urm… He seems a little,” I didn’t have the chance to finish my sentence.

“Oh, I know,” Max said. “He’s a little odd. Tightly wound. Especially his lisp, and everything. Takes a lot to understand him sometimes.”

“Yes.” I said. “Exactly,” and slowly walked back to my office. As though the fog was clearing, suddenly all became clear, and I realized he must have been asking for a mouse for his computer.

‘Yes,’ I thought. ‘That must be it.’ I knew he’d been working on some graphics and a good mouse would make that a lot easier.

I walked in with renewed certainty and a sense of clarification, a crisis easily averted. Sitting at the table, Michael still looked nervous and awkward. ‘Silly boy,’ I thought, giggling to myself.

He blushed, and stood up, closed the door of my office and then to my surprise excitedly said, “I altho want your puthy…”

Now, I must get on with this email because there’s so much mounting on my desk, and I am getting a little behind (…phrasing…).

I meant to chat with you as most of my members are in USA and Europe. As we move into the glories of summer a wonderful opportunity comes, as we can apply a little blush, and blame the sun should anyone notice. If you are going out and dressing in public already this may seem a little redundant, of course.

I like as many as possible of my members to integrate a little of their femme self into every day. Using subtle amounts of make up does this wonderfully.

In summer most women actually use a little less make up, though using a bronzer is an exception. There’s no reason in the world why you shouldn’t do the same. Just as secretly wearing panties to work is liberating, using a little additional color on your cheeks has the same effect.

Now, as for Max, I can think of a good way to put some color in his cheeks. Where’s my office ruler? 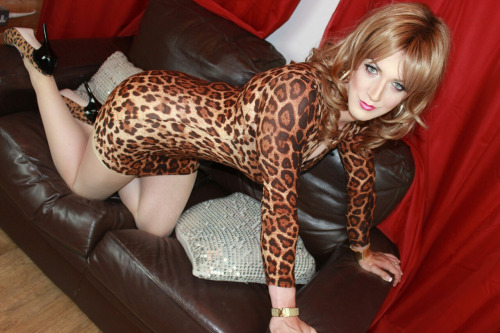 Such goings on about the place!

Few sights can be more disturbing than Amanda, my wife’s hideous friend, in a two piece bathing suit. It was this unsettling image that greeted me when I arrived home this afternoon following a photoshoot with Bernard at the advertising agency.

Amanda was in our back garden, trying to tan her body, in much the same way that if you leave a piece of leather in the sun it becomes hardened and cracked. As I let Hannibal, my little black and brown Dachshund, out into the garden to my surprise he sprang across the grass and made a leap to bite Amanda’s bikini bottoms. As you can imagine, Amanda’s scream was so shrill you’d think someone were cutting through concrete with a rotary saw.

“Get him away! Get him away,” she screamed. Never before has so much flesh been restrained by so little fabric.

I sipped on my margarita as I watched Hannibal trying to pull the bikini from her. Then said, “Calm down,Amanda. He’s just being affectionate.”

In response Amanda started to run round the garden, arms flailing, with a dachshund hanging from her bum.

“Hannibal,” I mumbled, as I took another sip of my margarita.

The last I saw of her she was flapping away down the street, hotly pursued by Hannibal, who doubtless thought it a great game. I suspect I’ll be hearing more about this incident later.

That however, is not the main reason I am writing to you. Tonight is a warm Montreal evening, and it’s the perfect time to listen to the latest Youtube version of Playtime With Fiona. This weekends offering is a special one, and a little unusual. I know you’ll love it. This weekend is also the perfect weekend to experiment with some lighter summer shades of lipstick, a summer shade of eye shadow, and of course some new outfits for the beach or lake.

Have a wonderful weekend. 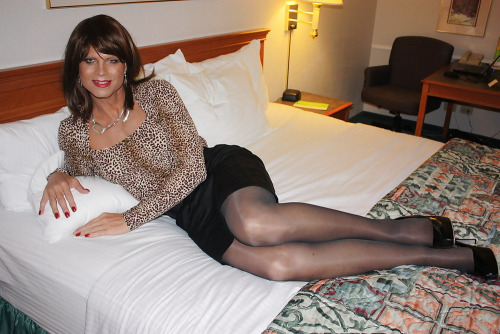 You’ll love the feeling of sexy excitement that a close shave gives you!