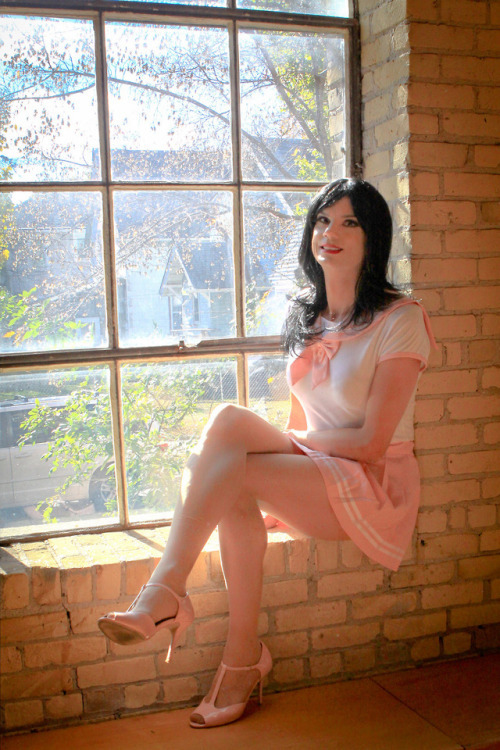 ‘Well, it all sounds highly suspicious to me,” I said. “And, Ali, I thought you said you had a word with Jeff in immigration.  You were going to have him stopped at the airport.”

Ali looked a little sheepish and then said quietly, “He took the lunchtime flight.”

“Well he was on his break,” said Ali. Then he added, as though it explained everything, “He had to take his dog to the vet.”

Ali withdrew from my kitchen and returned to pottering in the garden, leaving me quite unsettled. I was still feeling disrupted when Marjory appeared at the back door a few minutes later.

Marjory tolerates me in a state of mild disapproval. While feeling quite confused about my crossdressing, she has come to terms with it partly because her son Max helps me with some technology matters, and the fact that she’s in a rather sordid relationship with my wife’s best friend, Amanda.

I don’t have any issue with her lesbian proclivities, it’s more a matter of finding anything to do with Amanda sordid. If you’re a regular reader you’ll know Amanda has a strange fondness for tweed, and that she’s the editor of that venerable organ, Pig And Pig Farmer.

“I just thought I’d pop in,” said Marjory, inviting herself in.

“Make yourself at home,” I said and poured the tea.

“So, I heard Sebastian escaped,” said Marjory. I think she views some of my good friends as being rather like captives in some prison of friendship.

I made a mental note to slap Max.

“I believe he’s off on an escape – a holiday – some such. Oh that’s right, it’s something for Personal Trainers Without Borders.”

“How exciting,” squeeled Marjory. I began to understand why Amanda and Marjory made such a natural couple. I’m sure neither of them would be tolerated by anyone else for extended periods of time. “Where did he go?”

“They sent him to a place called ‘Moldova’. Somewhere east, I believe.” I said.

“Moldova?” replied Marjory. “Not ‘The Moldova’?”

I looked at Marjory with circumspect reserve. I’d heard of The Yukon, and The Bosphorous and The Arctic. I’d never heard of a country like Moldova being credited with a ‘The’.

“Well, yes, I believe so,” I replied, wondering what was driving this familiarity.

“I’ve just been reading about that place. It’s a fascinating culture. Who would have thought…”

“Fascinating? I thought it was a bit of a toilet,” I replied. Admittedly I’d not really done much in the way of research. “ As far as I can see their main source of export earnings come from the processing of first world toxic waste and the ransoms from the kidnapping of foreign nationals.”

“Well, one might say that,” said Marjory rather taken aback. “Even so, you don’t find many countries in the twenty first century where there’s still a tradition of cannibalism.”

I stopped in mid sip and placed my teacup on the counter.

“A tradition of what?” I said calmly.

“Canabalism. One of the last cultures…” As Marjory’s words trailed off, I spoke over her.

“Personal Trainers Without Borders have sent two people out there who disappeared without trace. And now Sebastian’s there.”

What was it he’d said he was planning to do there? I searched my memory for what he’s been saying about the place. Something to do with nutrition.

“Oh, God!” I said. “Sebastian’s supposed to be teaching them about being vegan! I thought that sounded a little dodgy. I don’t think this is quite what he had in mind when he heard he’d be getting aquainted with their nutrition and culinary practices.”

“You can’t be serious,” said Marjory.

“I told him he shouldn’t leave Montreal! No good can come of it.”

I have yet to receive a post card from Sebastian. I assume they don’t have internet out there. Come to that they probably don’t have a postal service. I shall wait and see what happens.

However, that’s not the main reason I’m writing.  I am thrilled the way my Patreon is coming along. You can help me reach my next goal by signing on here – http://Patreon.com/fionadobson  and joining up.

Alternately I’d love to see a few more of you in my Premium Program.  You know it’s only $35 a year and is very popular. I add content to it all the time, so you’re sure to continue getting great material as time goes on. Currently there’s about 18 months of content and building. Of course, it also gives you priority on  all the other services I offer.

I’ve also been pleasantly surprised how my Whatsapp group has taken off. There’s a lively discussion in there most days, and it’s become a very supportive place for many of us.  It has the feeling of a cafe one checks into now and then to talk with good friends. I am very happy with the way it’s developed. If you’d like to join the conversation be sure you feel it’s the right place for you by checking it out here.

I need hardly add that my Patreon now contains some wonderful hypnosis, stories from the lascivious Mistress Meg and Katia Thornwood, as well as a host of other delights. Be sure to look through my Patreon page.

Have a lovely week,

PS. By the way, if you’d like to upgrade to the Premium Program just go here .